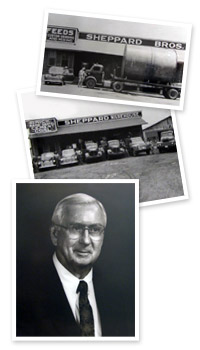 Howard Sheppard was always fascinated with trucks even as a young boy and in 1943 he bought his first truck to haul sand and gravel. In the mid-1940s he earned about $2.40 for a load. Mr. Sheppard hauled whatever needed to be hauled in the area. Soon he was able to purchase another truck. In 1950 he married Barbara Holmes, and with her help, the company began to grow. They began to build a strong reputation as the reliable source for transporting kaolin. As the company continued to grow, it began to expand into other industries including chemicals, frozen poultry, wood products, agriculture, consumer goods, concrete beams, and other raw materials. While it’s primarily served the Southeast, Howard Sheppard has hauled in all 48 contiguous states.

Family tradition continues as Mr. Howard's son, Cliff, presides as the current president of Howard Sheppard Inc. Cliff's sons are also part of the family business as Trey serves as vice president of Kaolin Mining Division and Mitch serves as Vice President for the Intermodal Division.

Located in the heart of the Kaolin Industry, Howard Sheppard is proud of its record of service as the oldest and largest carrier domiciled in the clay belt. With family traditions and dedicated employees, we plan to continue that record for years to come.